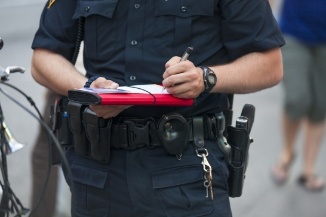 My generation was probably the first to grow up watching television. I remember the little black and white TV in my room where I watched immortal classics such as Howdy Doody, Captain Video, Superman and the Lone Ranger. I suppose I should have spent more time curled up with a good book or communing with nature, but TV, even the terrible TV of the early years, was like a drug whose grip I could not break. I was seduced, under the spell and captive to an unrelenting gravitational force from which there was no release.
Truth is, I still find myself staring at video images, albeit on a much larger screen part of a more sophisticated video system. Captain Video and Howdy are long gone and it’s usually not worth the time to watch the Mets play these days. Nope, instead of watching the Lone Ranger and Superman, I find myself in front of a screen, watching countless mobile and in-station videos that are prepared for different purposes by law enforcement.

Many police departments maintain extensive in-station video to create a record of what happens within their stations. Mobile video systems have been used for years. Sometimes referred to as “dash cams,” these systems automatically engage when overhead lights start flashing. They can also be activated before a driver is “lit up” by flipping a switch in the patrol car. There are also closed circuit cameras installed in public areas which provide a view of what occurs below on the street.

The newest rage of course, is body cameras, commonly referred to as body cams. Clipped on the officer’s uniform, these small devices see and hear everything the officer sees and hears. While not perfect, they are an improvement over fixed cameras and mobile video that mostly see through the windshield of the patrol car. This can be a problem. As anyone who has represented a defendant in a State Police DWI case knows, the driver is always taken in front of his car and out of the sight of the camera, for administration of field sobriety tests. These tests usually determine whether a driver drives home or is transported to the local police station or barracks for breath testing. The ability to actually see the driver perform these tests is crucial when representing a defendant.

On the other hand, body cams go where the officer goes. If the driver is taken to the front of his car and out of the sight of the dash cam, the body cam goes along with him. There is no more excuse that “safety” considerations prevent creation of a record of what really happened on the street.

I’ve seen body cams in action and have represented clients whose cases were resolved because of what they recorded. A good example involved a client who was taken to the neighboring town for breath testing when the local breath test device malfunctioned. The officer of course, is responsible to conduct the 20 minutes of observation after arriving at the other station, before the breath test can begin. Through the lens of the Body Cam then, we can see the defendant sitting across from the officer, who engages the defendant in conversation to pass the time. The 20-minute clock is ticking when another driver arrives for breath testing because of the same problem.

What happens next changes the outcome of our case and results from a body cam that just keeps absorbing images and sounds. The officer gets up from his seat in the breath testing room, goes to the next room to greet his fellow officer and engages the young lady who has just arrived in conversation. End of 20 minutes of observation, end of breath test, end of per se violation. Of course, the officer’s report reflects that the proper observations were made without interruption before the breath test was conducted.

As an attorney defending drivers in DWI cases, I look to the video, whether mobile, body cam, in-station or from a pole outside a 7-Eleven store, to find out what really happened. This is because officers and troopers seem to prove the proposition that creating a record with the written word is a lost art. I am being generous.
Many reports are cut and pasted or at best reflect a “templet” which the Officer or Trooper has committed to memory. I once represented a driver stopped on a bridge, fortunately for him, under a camera on a light pole. The officer’s report described in detail how my client failed all of the field sobriety tests conducted after he was asked to step from his car. Unfortunately for the officer, the video showed how the Officer approached the car, opened the door, pulled the driver out of the car and arrested him. No field sobriety tests were administered, no less failed.

The New Jersey Supreme Court recently found that video recordings were essential discovery that a prosecutor was bound to provide. In State v. Stein, the court rejected the State’s proposition that videos did not have to be produced. Rather, it held that videos were required to conduct fair and just trials.

Of course, the real question will be whether towns and other jurisdictions purchase equipment that will provide video evidence. Recent legislation requiring this was found to create an unconstitutional burden on local government by The Council on Local Mandates. One might conclude that legislation without adequate funding was simply a cynical exercise. If there was a will, the legislature would have found a way, perhaps using the Drunk Driving Enforcement Fund which brings significant funds back to towns for extra duty DWI patrols and related enforcement activities.